SPEEDWAY: BIRMINGHAM got a pivotal week up and running with an impressive 51-39 home success over Mildenhall.

With four more meetings to come in the space of the next week, the Brummies gained a big confidence boost with a comfortable win over one of their play-off chasing rivals.

The 12-point victory ensured the reigning Champions move back level with fourth placed side Cradley as they continued their unbeaten home record in the league.

Despite being frustrated with a ‘lack of speed’, Liam Carr still top scored on another impressive night from the Brummies’ No.5.

Taylor Hampshire shone at reserve once again as he achieved double figures for the fifth time since joining the club. 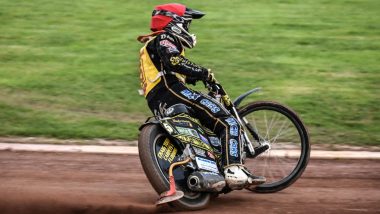 Captain Jack Parkinson-Blackburn reeled off three straight classy race wins at the start of his night while guest reserve Alex Spooner battled hard for his points.

Layne Cupitt endured a frustrating night, sliding off on bend two on three separate occasions, and he’ll be keen to put it behind him going into Friday’s away meeting at league leaders Belle Vue.

Team boss Graham Drury said: “It was another deserved victory in a meeting which came in two parts I felt.

“We had a heavy downpour about an hour-and-a-half before start time, which varied to the time we expected it based on forecasts.

“That altered a bit of the pre-meeting preparation that we did on the track and I think the conditions favoured us much more than they would have done for Mildenhall with what they’re used to.

“We were dominant before the break, where we won all ten of the races prior to the interval, but once the track dried out it played into their hands a bit more.

“But all in all it was another solid team performance, we stopped them from getting anything out of the meeting and we’re delighted to start a huge week off with a win.”