SPEEDWAY: BIRMINGHAM’s unbeaten home league record came to an end in a last heat decider as they missed out 47-43 to leaders Belle Vue.

With the reigning Champions taking on the current occupants of the third tier’s top spot, a fierce contest was naturally anticipated.

And that’s exactly how things panned out too with no more than four points ever separating the two sides.

The Brummies went into the final race needing a heat advantage to snatch something from the fixture.

But despite the best efforts of previously unbeaten skipper Jack Parkinson-Blackburn and in-form man Liam Carr, the Belle Vue pairing of guest No.1 Matt Williamson and former Brummie Jack Smith were able to seal the win for the visitors.

Birmingham boss Graham Drury said: “Of course we’re disappointed to taste defeat at home for the first time in the league this season but we played our part in one hell of a tense speedway meeting which went right down to the wire.

“There’s no shame in losing to this Belle Vue side – they’re in form, they’re top of the league for a reason and for me they’re by far the best team in the division by a country mile.

“To take them to a last heat decider is a really good effort I feel and it’s just a shame we couldn’t nick something right at the end. 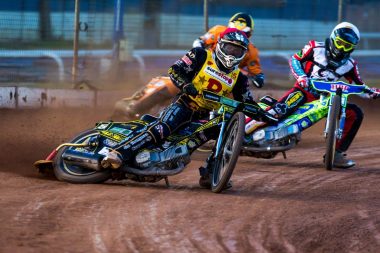 “A few of our lads had some problems with their machinery tonight and it’s been a recurring issue over the last few meetings so they need to make sure they get those sorted before our next fixture.

“But they shouldn’t let their heads drop too much – they’ve pushed a very strong Belle Vue side all the way and thanks to our run of nine league points from the last seven days, we’re still well in with a shout of making those play-offs.”

The Brummies now face a two week break from action before hosting their final regular league fixture of the campaign against Kent on Wednesday, September 6, in what could prove to be a crucial clash with a potential play-off spot up for grabs.