SPEEDWAY: A FULL maximum from Lakeside Hammers number one Zach Wajtknecht wasn’t enough to secure a rare away win as Birmingham Brummies defeated the London outfit by just two points on Wednesday night.

On the hottest day of the year, the Brummies turned the heat on too as they denied the Hammers a fifth straight Travel Plus National League victory.

Graham Drury’s men did enough to seal another invaluable three points and extend their unbeaten home run in the league.

Tom Bacon scored double figures for the fifth meeting in a row since moving down from the No.1 position

Guest reserve Taylor Hampshire bagged himself two race wins as well as a stunning manoeuvre around the outside in heat 12 to secure a pivotal second place in a 5-1 at an important stage of the meeting.

Liam Carr started his night off with a pair of victories too, but his final tally was hampered after being penalised with a 15 metre handicap on two occasions.

David Mason enjoyed a solid debut for the Brummies, rounding off his night by taking that chequered flag in the heat 12 5-1 as he helped defeat his former club.

Jack Parkinson-Blackburn had a steady return to racing following his period of inactivity and while both Layne Cupitt and Alex Spooner’s points didn’t reflect their efforts, their contributions were the difference come the end of the meeting. 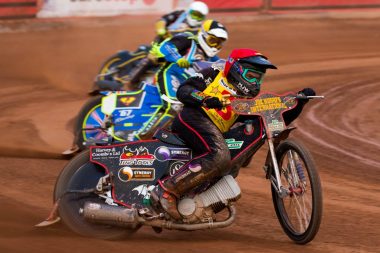 The win was wrapped up in heat 14 when Tom Bacon and new Brummie Taylor Hampshire secured a 4-2.

Team manager Graham Drury said after the meeting: “We’re delighted with the win against a strong Lakeside team who’ve been in form of late and it’s a really pleasing result.

“I don’t begrudge Lakeside their consolation point because they played their part in what was a good advert for the National League and I think it was a fair result overall.

“Both sides had their fair share of both bad and good luck and in the end it balanced itself out.

“It was another team performance in the fact that everyone got stuck in, they dig deep and encouraged each other.”

The Brummies were back in action last night after The Observer went to print against Plymouth in the club’s first leg of their Knockout Cup tie.