Brits are loving the return of football, with 53 per cent watching matches over the weekend

RESEARCH of more than 2,000 adults revealed those football fans spent an average of more than ten hours watching games between Friday and Sunday.

Some 37 per cent admitted to soaking up as much of the coverage as possible, watching both the pre-and post-match commentary.

However, one in five admitted they were worried about their increased energy usage over the weekend as a result.

With pubs and stadiums still closed to the public, free-to-view options meant even more could tune in at home, including to watch the weekend’s biggest game – the Merseyside derby between Everton and Liverpool.

The BBC also showed its first Premier League game since its inception in 1992.

Without being able to watch with friends, 46 per cent of fans said they relied on technology more than usual to recreate a good football viewing atmosphere. 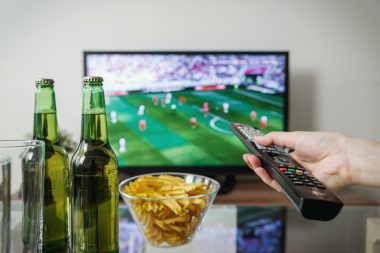 The average viewer used two devices during match time, with one in six fans turning to video calls to debate the game with friends while they watched at home – discussing moments like David de Gea’s mistake in Manchester United’s draw with Tottenham.

A quarter also turned the kettle on to make tea during each match and one in ten switched on the blender to make a Premier League cocktail.

Robert Cheesewright, director of corporate affairs at Smart Energy GB, which commissioned the research, said: “The Premier League is finally back and, although fans are unable to enter stadiums, every game is available to view on television, which brings about a greater reliance on TV’s, laptops and smart devices as people try to recreate that match day atmosphere you get nowhere else but on the terraces.

“Increased energy use during the Covid crisis has meant an increase in bills for many households, but there is a simple way to stay in control and that is by getting a smart meter installed.”

The study also found a third of those polled were incredibly excited to see the return of the Premier League – with a further one in six looking forward to the games even though they are not usually avid football fans.

Almost a fifth watched together as a family as they have got used to doing things together during lockdown.

Thirty-one per cent have been so happy about the return of the sport that they did not care about the games being played in empty stadiums.

Those in the capital seemed to miss football the most, with 63 per cent saying they have watched at least one game since it was restarted last week, although many Arsenal fans may wish they had not.

Aside from their hunger for football, 43 per cent turned on the oven to cook up delicious treats to enjoy throughout the game such as pizza, nachos or burgers.

For those in the house not so interested in matters on the field, they were either watching TV in another room, video calling friends and family, streaming Netflix or cooking and baking.

Jake is the Bees-knees as Moors hold Coventry

Moors up and running as Brakes stall