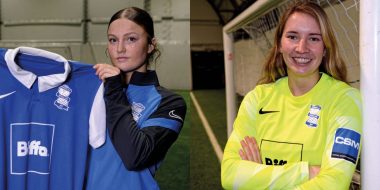 Ruby Mace, left, and Sophie Whitehouse, right, join on loan until the end of the season. Pictures: Roy Smiljanic/BCFC.

LATEST Birmingham City Women recruits Ruby Mace and Sophie Whitehouse have spoken of their delight at joining the club – having both swapped North London for the Midlands on loan deals.

Mace, a 17-year-old midfielder who can also operate in the back line, arrives from Arsenal – for whom she has made three Super League appearances to date – whilst Whitehouse, a 24-year-old goalkeeper, has arrived to provide competition to number one Hannah Hampton upon her move from Tottenham Hotspur.

“I’m very grateful for the opportunity to get game time and to spend it with Birmingham, to have been noticed by the club is something I really respect,” said Mace, the most recent arrival having put pen to paper on Tuesday.

“She [Carla Ward] has spoken to me and said she’s excited to have me. She wants me to get minutes, to see what I can do, so that I can hopefully go back to Arsenal with minutes already on the pitch.”

Whitehouse has experienced a very different path to her new team-mate, having been born local to her parent club in Enfield before growing up in Tanzania and the United States – where she got a taste for university football in preparation for her move to Spurs.

While the shot-stopper is yet to appear in the Tottenham first team, she is excited about the prospect of deputising when needed for a first taste of Super League action.

“The opportunity here is better for my development as a goalkeeper, so I’m looking forward to the future.

“I’m really excited to work with Tony [Roberts] the goalkeeper coach, I’ve trained with him a couple of times and feel he can push me, plus the chance to train with Hannah will be exciting.

“I’m hoping to get a little bit more exposure by working with the team to improve my game, so that I’m ready for next season – to either stay here or develop in the future.”