The midfielder took his goals tally to six this term after netting in Tuesday night’s 2-1 win at home to Torquay United, adding to another strike in last weekend’s 2-1 victory away at Aldershot Town. It leaves the 22-year-old joint top scorer in the Vanarama National League.

“The thing with Joe is that people don’t see his running stats and they’re phenomenal,” said Ardley. “He is a lovely, tidy player. He’s been excellent since day one of pre-season.

“He looks like he has gone away and come back fitter and stronger because every goal he is scoring he is running 40, 50, 60 yards at pace to get to the position to put the ball in the back of the net.”

Boss Ardley was delighted with back-to-back wins which leave Moors ninth in the table ahead of Saturday’s home fixture with third-placed Boreham Wood.

“As a team we have grown over the last couple of games,” he added.

“We weren’t great on Saturday but we ground out an important away win and on Tuesday I thought we were really good and more than deserved the points.” 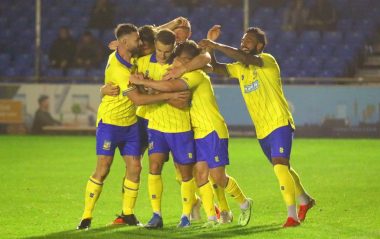 On Tuesday, Moors were twice denied by the woodwork – Justin Donowa smacking his shot against the post and Newton firing a 20-yarder against the bar – before getting the breakthrough on 32 minutes. Callum Maycock pushed forward and rolled the ball into Dallas who drilled home an angled finish for his third goal of the season.

Sbarra doubled the lead three minutes into the second period, completing a great interchange between Newton and Dallas.

Torquay sub Klaidi Lolos pulled goal back with 10 minutes left but Moors held on for a deserved victory. 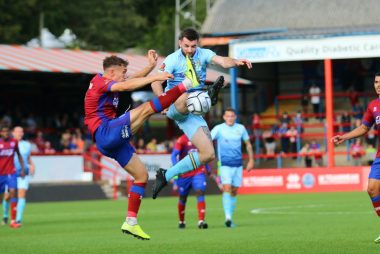 Sbarra’s fifth goal of the season snatched a 2-1 win at Aldershot Town on Saturday to give Ardley his first victory as boss.

On Saturday, Moors had shown their gritty resolve to snatch a victory Ardley admitted was tough on hosts Aldershot.

The Shots had the better of the first half and went ahead moments on 26 minutes with Giles Phillips heading home Lewis Kinsella’s corner. But Lois Maynard nodded home from Kyle Storer’s cross to equalise moments before the half-time whistle.

The winner came in the dying moments of the second period, with Andrew Dallas bursting through from halfway when a clearance ricocheted into his path and he set up midfielder Sbarra for a tap-in.

“We weren’t great and the most we deserved was a point,” said Ardley.

“It was a game where we had to battle and I can only give the boys credit for that.”