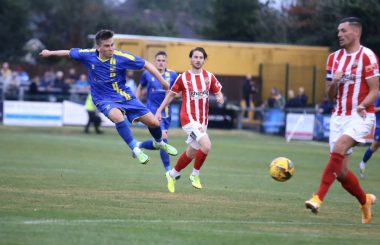 FINDING A route to win in a gritty encounter at Stourbridge gave manager Neal Ardley plenty of reason to be cheerful, as Adam Rooney’s penalty proved the difference at the War Memorial Athletic Ground on Tuesday night.

Solihull downed the Glassboys on the hour mark when the 33-year-old Irishman made no mistake from 12 yards following a prior foul on Jordan Piggott, handing former manager and Moors favourite Mark Yates a defeat in the first encounter between the two clubs since the 51-year-old departed the SportNation.bet Stadium.

For the man currently in the Solihull hot-seat, there was enough substance to suggest Moors are on the right track in their pre-season preparations.

“The plus of playing some of these teams that are in the leagues below us is that they’re ahead of us [in terms of fitness], because their season starts earlier,” said Ardley.

“Some of the opposition have three or four games to prepare, we’re only on our second fixture, so it makes it more of a test.

“I thought in the first half it was a test physically, we lost too many headers and 50-50 battles, but that was good because they were really up for it and caused us a problem that we needed to learn from.

“We got on top of that in the second half, worked more in the patterns that we wanted, and caused them a lot more problems.

“It’s all about minutes, most importantly about not getting anyone injured, but you also want to get that winning mentality and habits that win you games [instilled], so it’s pleasing to keep a clean sheet and win the game.”

Moors began their pre-season with a 1-1 draw at Banbury United last weekend, where the Solihull faithful finally returned for an away day after a 504 day drought.

Those in attendance were able to see a trialist send the visitors in front following a crossfield ball from Callum Howe, before the Puritans’ Morgan Roberts levelled up the scores before the break.