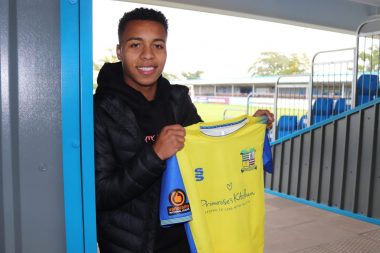 NEW loan signing Cameron Archer says he can’t wait to get started, after signing a deal with Solihull Moors from Aston Villa.

The 19-year-old striker will be at the SportNation.bet Stadium club until January 3, and goes straight into Jimmy Shan’s side for Saturday’s National League opener at Woking (3pm).

Walsall native Archer has been with Villa since the age of six, breaking into their under-23’s side when he was 16 and remaining a fixture of the team ever since.

His task this season will to provide depth to Moors’ striking department, where he will aim to share the brunt of the goals with Adam Rooney.

Archer enjoyed a breakthrough year in the 2019/20 season, being handed his senior debut by Dean Smith in a Carabao Cup tie at Crewe in August 2019, before catching the eye with a long-range stunner against Tranmere Rovers in the EFL Trophy for the under-23’s.

And with the prospect of regular minutes at a senior level, the teenager could not hide his excitement.

“I’m delighted to join the club and be around first team football,” said Archer.

“There are some familiar faces here. I worked with Richard Beale at under-18 level last season at Villa, so he already knows what I’m about.

“I’d like to think I’m a quick, sharp striker and I hope the fans see some goals.”