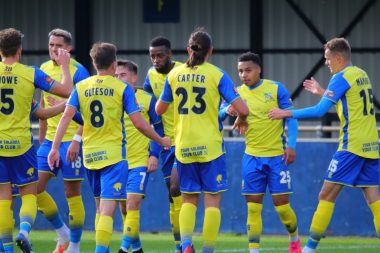 The rout gave Moors back-to-back victories for the first time in the National League this season, sending them up to fourth after three games played and nailing down a key marker for performance levels that Solihull must try and replicate going forward.

Joe Sbarra, Jamey Osborne’s long-range stunner and a Callum Howe header helped wrap up the three points, and while ultimately proving the most important important thing from the contest – manager Jimmy Shan was particularly delighted with the impetus shown by his side to make the victory concrete.

“As I said before the game,King’s Lynn are a tough opposition,” he said.

“To have that performance today and score that many goals as well as the power of that clean sheet was a fantastic display.

“I said to the boys at half time that we were in a similar position this time last Saturday at Woking, one goal to the good.

“We were in control, quite dominant and I didn’t want us to have a second half display like we had at Woking last week. It was important that we stuck to the task and kept to the script.

“That key word ‘intensity. I love that, with and without the ball. I thought the boys were very, very professional throughout the second half.” 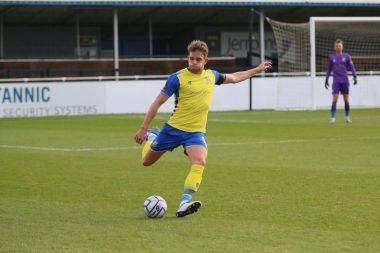 And with particular praise for two-goal Archer, it is clear that the Aston Villa loanee made a considerable impression to his new manager.

Archer was almost the architect for an opener, putting Sbarra clean through, the finish from the midfielder ultimately lacking though with Archie Mair saving comfortably in the King’s Lynn goal.

While the striker was next to be denied by Mair, he played the cross that resulted in the opener five minutes before the break.

Sbarra was well-placed to meet Archer’s centre, and had the simple task of applying the finish.

Within a couple of minutes of the restart, Moors were two goals to the good when Archer thumped home a powerful delivery by Jordan Cranston for his first goal in a Solihull shirt.

Osborne stole the show with a 25-yard curler just after the hour mark, making the perfect introduction from the bench to effectively kill off the game.

A fourth followed on 71 minutes with Archer in on the act again to finish on the rebound after another Osborne attempt was saved.

Howe’s thumping header with nine minutes to play then capped the scoring, putting Moors in good stead with a Tuesday night showdown away to Altrincham (7.45pm) at Moss Lane, before hosting Boreham Wood on Saturday (3pm).