All or nothing Moors must pick up points - Shan 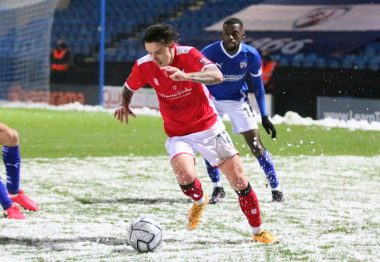 MOORS manager Jimmy Shan has challenged his side to become a different entity going forward, after suffering a slender 1-0 defeat to Chesterfield in their opening National League game of the New Year.

Tom Whelan’s goal minutes before the interval settled affairs in favour of the Spireites at the Technique Stadium on Saturday, despite ex-Solihull man George Carline seeing red late on, giving James Rowe’s men the advantage ahead of the reverse fixture on Tuesday night.

After a result which moves the Derbyshire club one place above Moors into 16th – level on 19 points – Shan is intent on making sure that Solihull start to register more points on the board for their efforts.

“Our form and our performances have been very mixed since our [FA Cup] tie at Morecambe,” said the 42-year-old.

“We can ill afford too many slip ups. We’ve not been very good at nicking a point or coming away and taking something from the game.

“At the minute, it seems that Solihull Moors are an all or nothing team – and that’s something that needs to change drastically. 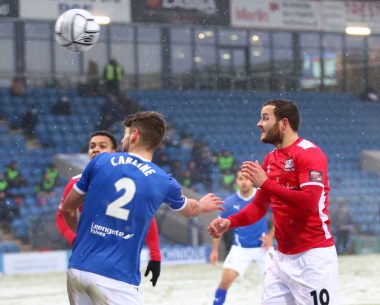 “The schedule is relentless and we have to go again, we need to start winning games of football.”

Playing their first match since December 19th’s 4-0 thrashing of Farsley Celtic in the FA Trophy, Moors were tasked with battling against bitterly-cold conditions in North East Derbyshire, with frequent snowfall disrupting the flow of the game.

Joe Sbarra sent the first effort of the match on target after being played through by Cameron Archer – spearheading the Moors attack – though the shot was a simple enough one for Chesterfield’s Kyle Letheren to deal with.

After a break in play, the away side went within inches of taking the lead after a counter-attack resulted in Archer pulling a shot wide of the mark after taking down Jamie Ward’s through ball.

Down the other end, Chesterfield were enjoying chances of their own, Jak McCourt finding himself unfortunate to beat Ryan Boot – but also the visitors’ crossbar – as a breakthrough neared.

With the next opportunity that fell the hosts’ way though, the opener came as a follow-up effort from Whelan arrowed into the bottom corner after Akwasi Asante was initially denied.

Going a goal down and losing Jordan Cranston to injury before the half was out, an uphill battle faced Shan’s men in the second period. 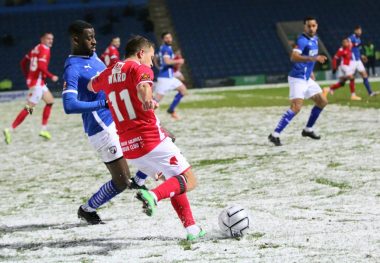 But the balance of play remained in Chesterfield’s favour, Tom Denton forcing a header goalwards from a Carline delivery as the match became a turgid affair with few openings.

Callum Maycock almost inspired a Moors leveller when taking play down the left flank and picking out Cameron Coxe inside the penalty area, but the wing-back ultimately failed to provide the finish.

The introduction of Kyle Hudlin provided Chesterfield with some more problems, which, combined with Carline’s second yellow card offered a glimmer of late hope for the away side.

With no golden opportunities being created late on, Solihull were condemned to a fifth league defeat this term.

Shan was keen to point to key early chances missed by his side which, he felt, would have undoubtedly changed the outlook of the game had they hit the net.

“I think we’ve got to be ruthless and better in both boxes, I think we had arguably the two best clear-cut chances in the opening 20 minutes,” added the Moors manager. 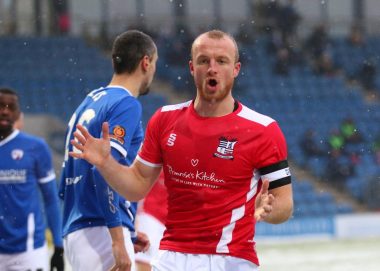 Alex Gudger made a return to the side on Saturday. Pictures: Richard King.

“If we convert both of those chances, it’s a different game and a different story, but we give them something to hang in on.

“They got the ball in and around our box quite frequently, and we have to be better at stopping that at source.

“There were opportunities where we’ve got to clear the ball, but we’re bringing the ball down and trying to play our out of defence in the [tough] conditions.

“I thought there was a response second half and we upped our intensity. We played forward more with a conviction, but once you’re a goal down it’s always difficult to get back into a game.

“I wouldn’t say they handled or adapted to the conditions any differently to us, but the fact of the matter is that we didn’t defend our 18-yard box well enough in the first half.

“We have to find a way of, for all of our good play in the last and the mid third of the pitch, have more of an end and more of a meaning in the final third – with more shots, crosses and taking more risks.