IT’S been a little while since the German brand reinvented a British icon – so how has it changed over the years? Jack Evans takes a look.

The Mini is as British a brand as they come. But back in 2001, a very German BMW took to reinventing this legendary icon, transforming the tiny original Mini into a far more luxurious and up-to-date affair.

It was a success too, with the Mini going on to become a smash hit across the globe. Since its inception, it has changed a fair bit as well, evolving and shaping to become the car we know today.

We can’t start without talking about the first generation of BMW Mini. Officially revealed at the 2001 Geneva Motor Show, the Mini took the motoring world by storm, thanks to its retro looks and classy interior.

Then, when they hit the road, it soon became clear BMW had crafted a car that wasn’t just great to look at, but great to drive too.

Prices started at £10,300 for the Mini One, rising to £11,600 for the more powerful Cooper variant, with both being built in Oxford and hitting the market in the UK two months before anywhere else in the world.

Arrival of the Cooper S

Hot on the heels of the One and Cooper variants came the Cooper S.

With performance in mind, it combined a 1.6-litre petrol engine with a supercharger, resulting in a lot more power than the ‘standard’ version.

It had a more focused suspension setup too, while the bonnet air intake became a design feature for all future Cooper S models.

It was a testament to the success of the design and execution of the Mini, that’s for sure.

Flash forward to 2004 and the Mini Convertible arrived, bringing that wind-in-your-hair experience to the already-popular model.

It still retained space for four, but used a fabric roof that folds up behind the rear seats and didn’t require a cover.

The boot may have been small at 120 litres with the roof open, but as with the rest of the range, the Convertible sold like hotcakes.

Arrival of the GP

Things took a turn for the more serious, with the arrival of the GP in 2006.

Limited to just 2,000 models worldwide – with 444 made available to UK buyers – the lighter, faster and meaner GP sold out before a single customer had even driven a car.

Arriving as the most powerful production Mini to date, it used the same 1.6-litre supercharged petrol engine as the Cooper S, but it was boosted for more power while plenty of weight was stripped from the cabin to make the GP even more exciting to drive.

In August 2006, Mini chose to reveal its second-generation car.

It retained the same retro look like the original but was bigger and more efficient than before.

The 1.6-litre engine was changed, while the Cooper S used turbocharging instead of supercharging for the first time. 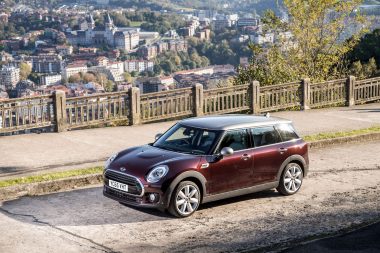 Mini took its first step in expanding the range with the introduction of the Clubman in 2007.

The start of electrification

At the 2008 Los Angeles Auto Show, Mini presented the E, an electric concept.

It created 500 Mini E vehicles, which were shipped for testing by private customers in California, New York and Jersey, with the results from this trial relayed back to Mini.

It also helped BMW to develop its electric i3 model.

The Countryman hits the road

Not content with the Clubman, Mini expanded the range in 2010 with the Countryman.

Taking advantage of the growing appetite for SUVs, the Countryman effectively took the Mini recipe and raised it further off the ground.

It had seating for five, four doors and a reasonably large boot.

It also retained the same funky styling that you got from the standard hatch.

The Roadster and Coupe add even more style

Moving along to 2011 saw the introduction of the Mini Coupe, a two-seater version of the standard hatch which was famous styled to resemble a backwards-facing baseball cap.

It was joined by a soft-top version – the Roadster.

It used a fabric roof like the standard convertible, but had a sleeker, more aerodynamically focused design.

A change of pace for Mini

In 2013, Mini introduced the Paceman, which represented a mash-up of an SUV and hatchback.

In truth, it was a slightly odd combination, as it had an upright bodystyle but just three doors. Sitting alongside the rest of the Mini line-up, it saw the firm’s range of cars swell to seven, ensuring that, at the time, there was a Mini car for all buyers.

It debuted a new interpretation of the car’s classic styling, but was still built in Oxford and was centred around that fun-to-drive experience.

Arriving in the UK in 2014, the third-generation hatch was bigger in every sense and utilised 1.5-litre three-cylinder engines – though the more powerful Cooper S benefitted from a four-cylinder, 2.0-litre petrol.

The Mini gains a set of doors 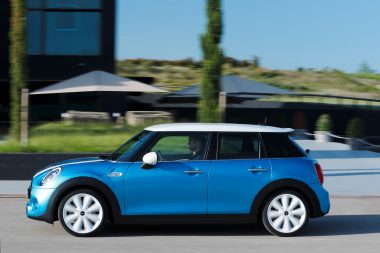 The Mini gains a set of doors. Picture: Mini/PA.

Shortly after the arrival of the third-generation Mini came a new, five-door variant, which brought improved rear legroom, a third rear seat, and a more accessible cabin.

It proved immensely popular and has continued to be a great option even today.

Mini followed on from the revitalisation of its hatchback with the introduction of a revised Clubman.

It was bigger than before but retained the useful split rear doors, which gave access to a larger boot than before.

The cabin was more spacious too, while a variety of petrol and diesel engines were available too.

In 2016, Mini showcased a real attempt at electrification with its Countryman Plug-in hybrid.

The first hybrid model to be offered by the brand, it combined a three-cylinder petrol engine with an electric motor and batteries.

Capable of driving for up to 25 miles on battery-power alone, it was easily the most economical car in Mini’s stable.

The year 2020 proved to be a big deal for Mini, as it was when the company’s first EV arrived in showrooms – the Mini Electric. Its styling was largely unchanged over the regular petrol and diesel models, while a zippy electric motor ensured it delivered the same winning driving experience.

The Mini Electric has gone on to prove popular, despite its relatively compact range of 145 miles.

In January 2021, Mini presented the latest incarnation of its famous hatchback, delivering a new look and a range of technology updates.

Though the styling was classical ‘Mini’, some key refinements – such as a new body-coloured front grille – ensure that it has remained looking sharp and up to date.