Just when we need her, Mary Berry is back with a new series all about the art of simple comfort cooking. Ella Walker speaks to her. 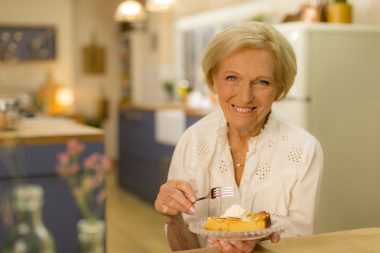 There is something incredibly soothing about the sound of Mary Berry’s voice. The Cordon Bleu trained chef and telly veteran has a knack for making you feel reassured, comfy, and in the mood for something hot from the oven.

Her new BBC 2 series, Mary Berry’s Simple Comforts – and accompanying cookbook – captures just that, and sees the former Great British Bake Off judge criss-cross the UK and Ireland, and nip across the Channel to Paris (pre-lockdown, of course) to brush up on her crepe making skills.

The 85-year-old visits the Scottish Highlands for hotpot and husky rides; checks out the fish and chips in Whitby, Yorkshire; gets to grips with butter in Cork, Ireland; and explores the Thames by boat, meeting rowers, barge allotmenters and the late Michel Roux Snr, en route.

We caught up with her to talk lockdown, community spirit and eating on camera…

THE SHOW SOUNDS VERY AUTUMNAL AND COSY. WHAT IS COMFORT FOOD TO YOU?

It’s the sort of food that the family want to come home to. The sort of food you prepare ahead – a lot of dishes in one pot. I encourage people to go with the seasons, but it’s quite difficult if you shop in a supermarket, because you don’t know the season – you get strawberries all year round. Personally, I go very much with the seasons. Now we’ve got an abundance of runner beans and we have carrots all through the summer; whatever I’m growing in the garden we use.

DID YOU GARDEN A LOT THROUGH LOCKDOWN?

I can assure you we’ve been out there. We’ve got a new garden, and I love it. So, we’ve been getting it into shape.

DO YOU FIND THE COOKING AS COMFORTING AS THE EATING?

I do, because I cook what the family enjoy – and what doesn’t take too long. I don’t really want to spend hours in the kitchen. I’m not actually going to stuff a courgette flower – I’ll leave that to the restaurants. I don’t do things that take ages, I don’t do an awful lot of complicated icings on cake. I might very well put some rose petals over a cake that I’ve finished, I’ll crystallise flowers because that’s quick – primroses or something like that – but I’m not going to make a lot of sugar flowers, because that’s not me.

HOW DID YOU FIND LOCKDOWN?

I found it ok. My cooking’s changed considerably because there’s only been two of us [Berry has been married to her husband Paul since 1966]. And I know exactly that it’s just two of us every week, so I don’t need any spare food for people who drop in. I didn’t use an awful lot of tinned food – I used my freezer as my store cupboard. I made things like fish cakes – we love fish cakes – and I did batches of minced beef and a fairly basic sauce, so I could take that out of the freezer and turn it into something with pasta, or into cottage and shepherd’s pies.

It’s just the right time to have simple comforts, because I think we’ve all been worried. It couldn’t be a better time to have warming comforting foods that all the family would enjoy.

YOU START THE SERIES IN PARIS, WHERE YOU FIRST STUDIED AT THE CORDON BLEU – HOW WAS IT?

I love travelling, it’s another way of getting all different recipes. [In] Paris I went round the bakeries [and] tasted amazing, amazing things. I tried to make a crepe, and of course, when somebody’s been making pancakes as a job, doing them one after another and queues of people come up to get them, all very delicious [they’re amazing at it], when I have a go, I’m not as quick, not as skilled – but they tasted just as good.

YOU ALWAYS GET STUCK IN. DID YOU ENJOY BEING A COX FOR A TEAM OF ROWERS AT HENLEY?

It was a bit of a shock! And then I saw the crew. They were all girls, and they were all smiling as one, and there I was as the cox. They gave me such a good briefing as to what I was up to, and what my job was, I learned quite quickly. And then I realised we were in a race, and I had to shout very loudly, ‘Do your best!’ and, ‘You can do better!’ – and I rather enjoyed it. The river is very calming, very beautiful.

AND THEN YOU WENT UP THE RIVER FOR LUNCH WITH MICHEL ROUX SNR?

He died very shortly afterwards. What an amazing man, full of knowledge and of course his cooking was second to none really, so traditionally French. It was nice to see French cooking there at [Roux’s restaurant, The Waterside Inn] Bray taking time, a lot of preparation. A lot of tradition.

YOU ALSO VISITED A RIVER COMMUNITY AND THEIR BARGE ALLOTMENTS. WHAT DID YOU LEARN?

That was really interesting; I didn’t know it existed. All these barges people live on, and they garden – they were growing butternut squash, fruit, all sorts of things. I thought, ‘How do they do that, in such a limited space?’ There was one barge I did my cooking on, which was the social barge where they came for musical evenings, for dancing, and it was a great hub of community. Everybody knew everybody else. It was beautifully tidy, it was fun, and full of community spirit.

OF THE PEOPLE YOU MET DURING FILMING, WHO REALLY INSPIRED YOU?

I met so many people, the ones I particularly remember are the ones who did their jobs with great enthusiasm and devotion [like] Graham, who was training huskies in Scotland – he loved his job. The huskies knew exactly who was boss. And you could just see these dogs, turning their heads and doing exactly what he said, the speed he wanted to go – and I was there at the back, wondering how fast we were going!

WERE THERE ANY CHALLENGING MOMENTS?

When I was in Yorkshire, the weather was so bad I could hardly talk. The wind was blowing, and I was trying to make a pate on the quay [at Whitby], and the ingredients flew off the table! I still managed to grab them.

HOW DO YOU FIND BEING FILMED EATING? MOST PEOPLE WOULD HATE HAVING A CAMERA IN THEIR FACE WHILE SCOFFING SOMETHING.

It doesn’t bother me at all because I’m usually rather hungry and I’ve waited for it. And I am afraid I really love food – and I’m usually tasting rather delicious things.

AND WHEN IT’S NOT DELICIOUS?

Well, I have [had to spit things out] when I’ve had something that’s had salt added instead of sugar!

MORE THAN ANYTHING, WHAT DO YOU HOPE PEOPLE WILL TAKE FROM SIMPLE COMFORTS?

To enjoy cooking, as much as I do.

This is what too much salt is doing to your body