Could your child have undiagnosed ADHD?

They’re often misdiagnosed as ‘naughty children’ – and even if they’re officially diagnosed with ADHD, many kids are still simply labelled as naughty.

But attention deficit hyperactivity disorder (ADHD) is a recognised medical condition that affects around 3-5% of children and 2% of adults.

One of the most common neurodevelopmental conditions in childhood, it is described by the NHS as: “A condition that affects people’s behaviour. People with ADHD can seem restless, may have trouble concentrating and may act on impulse.”

Dr Tony Lloyd, chief executive of the ADHD Foundation (adhdfoundation.org.uk), says: “There are several enduring myths about ADHD. Many parents will no doubt be concerned that a diagnosis of ADHD may be harmful in itself because in the past it’s been associated with ‘naughty boys’, or about giving children drugs to make them behave.

“This is such a tragedy because although one in 20 children have ADHD, less than half of that number are ever assessed or diagnosed – and as many as 50% of children who are referred for an assessment don’t in fact have ADHD but instead have behaviours linked to trauma, anxiety or other neurological conditions.

“Sadly, many teachers, and some parents, think ADHD is about bad behaviour. ADHD is not a behavioural disorder – it’s a neurodevelopmental condition characterised by a delay in development in certain parts of the brain.”

How is ADHD diagnosed?

The Royal College of Psychiatrists (rcpsych.ac.uk) says there’s no single, definite test for ADHD and diagnosis requires a specialist assessment by a child psychiatrist or a paediatrician, who will observe the child and look for recognised patterns of behaviour, and get reports of their behaviour at home and school. Diagnosis doesn’t usually happen until after the age of six.

What do parents need to look out for?

The ADHD Foundation says children with ADHD may exhibit certain characteristic behaviours and may be:

Lloyd advises parents to speak with their child’s school and ask if they appear to be struggling with learning and displaying anxiety. “Anxiety is the main cause of distressed behaviours that aren’t context appropriate for the classroom,” he says.

A child with ADHD may often lose or forget things.

“What defines these characteristics as ADHD is that they present in a more extreme form.”

4. Unable to organise their thoughts

Children with ADHD often have what’s known as poor executive functioning skills. Lloyd explains: “That’s the ability to organise their thoughts and regulate their emotions to plan and organise how they do their school work, resulting in difficulty with starting tasks. So they procrastinate and become frustrated and overwhelmed as they can’t order their thinking. On the plus side, this can also be the engine of creativity!”

“They find it difficult to stay on task or become confused and frustrated by too much information or stimulation,” explains Lloyd.

Some children with ADHD can be hyperactive. “They’re always on the go with seemingly boundless energy,” says Lloyd, “and no matter how tired they are, they still have difficulty sleeping.”

Some children with ADHD can be impulsive. “They may say and do things they know aren’t appropriate,” says Lloyd, “but their brain has failed to consider the consequences of their words or actions.” He says such impulsiveness isn’t the same as intentional inappropriate behaviour.

8. Have relatives with learning difficulties

Lloyd suggests parents ask if anyone in their extended family on both sides has either dyslexia, dyspraxia, autism spectrum or other learning impairments. “We know that while genetic in origin, ADHD comes under the umbrella of a number of learning difficulties which often co-exist,” he explains, pointing out that more than 40% of children with ADHD also have dyslexia.

Pre-term births, epilepsy and brain injury can also be factors in determining whether a child has ADHD, and Lloyd adds: “ADHD is genetic in origin but how it affects the individual is determined by the environment – so how you parent your child, how your child’s needs are addressed in school and things like nutrition, good sleep and even traumatic events in childhood can cause that genetic potential to be amplified.

“Many achieve at school and there are many high profile role models who have ADHD – from Leonardo da Vinci, to astronaut Scott Kelly and Olympic gold-winning gymnast Simone Biles.

“It’s estimated that over 35% of entrepreneurs have ADHD or dyslexia – or both.

“Identified early and managed well – there’s no reason why your child cannot achieve their potential. Your child is not sick or ‘disordered’, nor are they mentally ill – they are different. Yes, these differences can be very impairing, but with the right support, early intervention and informed and loving parents, your child can thrive.” 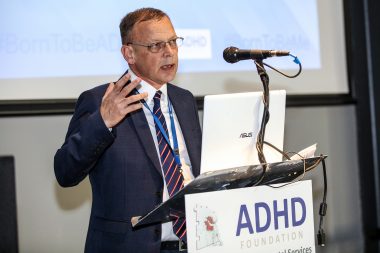 Make Your Home Worth More With These Improvement Ideas

Strawberry Moon: what is it, when can you see it and what could it mean?

Diabetes Week: Ed Gamble on how having diabetes is his ‘comedy superpower’