INTERVIEW: The master of observational comedy Ed Byrne is coming to Solihull

A TV household name, in the past year Ed has appeared on Live At The Apollo (Host, BBC), Mock The Week (BBC), The Pilgrimage (BBC), Top Gear (BBC) and QI (BBC) and now he’s coming to Solihull.

Join Ed as he takes a long hard look at himself and tries to decide if he has ANY traits that are worth passing on to his children on 23rd February at the Core.

Jason Barlow caught up with Ed to find out more about the man, the legend and his mastery of observational comedy…

With 25 years under his belt, Ed has parlayed his on-stage success into a variety of notable television appearances. A regular on Mock The Week and The Graham Norton Show, Ed has recently co-presented Dara & Ed’s Big Adventure and its follow-up Dara & Ed’s Road To Mandalay, and managed not to disgrace himself on Top Gear or whilst tackling one of The World’s Most Dangerous Roads. As a semi-professional hill-walker himself and fully paid-up humanist, he also brought a refreshing warmth and honesty to BBC2’s recent hit The Pilgrimage.

But the Irishman is still best-known and best appreciated for his stand-up performances. A quarter of a century at the comedic coal-face has equipped Ed with a highly evolved story-telling ability and a silky mastery of his craft.

Yet his wit, charm and self-deprecatory observational humour is often underpinned by a consistently hilarious vitriol and sense of injustice at a world that seems to be spinning ever more rapidly out of control.

Having recently hit a new peak with shows such as the sublime Spoiler Alert and reflective Outside, Looking In, which explored the minefield that is modern parenting and a generational sense of entitlement, Ed’s new show If I’m Honest digs ever deeper into a father’s sense of responsibility, what it means to be a man in 2019, and whether he possesses any qualities whatsoever worth passing on to his two sons. Occasionally accused of whimsy, If I’m Honest is a show with a seriously steely core.

Gender politics, for example, is something Ed readily engages with – deploying his customary comedic zeal. He says:

‘I’ll admit that there are things where men get a raw deal.

‘We have higher suicide rates, and we tend not to do well in divorces, but representation in action movies is not something we have an issue with. It was Mad Max: Fury Road that kicked it all off, even though nobody complained about Ripley in Alien or Sarah Connor in Terminator 2. Of course, social media means this stuff gets broadcast far and wide in an instant, which emboldens people.

As ever, Ed manages to provoke without being overly polemical, a balancing act that only someone of his huge experience can really pull off. He says:

‘I did stuff about Trump and the Pizzagate right wing conspiracy and a couple of the reviewers said, “Oh, I would have liked to have watched a whole show of this”. And I think, ‘well you might have, but the average person who comes to see me would not like to see that’. I like to make a point or get something off my chest, or perhaps I’m talking about something that’s been on my mind, but the majority of stuff is just to get laughs.

‘People who come to see me are not political activists necessarily, they’re regular folk. If you can make a point to them, in between talking about your struggles with aging, or discussing your hernia operation or whatever it is, you can toss in something that does give people pause as regards to how men should share the household chores.’

Ed, who broke through in the mid-1990s when the New Lad became a genuine cultural phenomenon, doesn’t want to submit to any unnecessary revisionism, but admits that if the times have changed, he has changed with them. He reflects a little ruefully on one of his most famous jokes.

‘There’s an attitude towards Alanis Morrisette in the opening of that routine that I’m no longer comfortable with, where I call her a moaning cow and a whiny bint… slagging off the lyrics of the song is fine, but there’s a tone in the preamble that I wouldn’t write today.’

The new show also takes his natural tendency towards self-deprecation to unexpected extremes.

‘I do genuinely annoy myself,’ Ed concedes. ‘But the thing of your children being a reflection of you, gives you an opportunity to build something out of the best of yourself only for you to then see flashes of the worst of yourself in them. It’s a wake-up call about your own behaviour.’

When I challenge him over the degree of self-loathing he displays, he disagrees.

‘Self-aggrandising humour is a lot harder to pull off than self-deprecating humour,’ he insists. ‘A lot of people get really annoyed when Ricky Gervais is self-congratulatory. I always find it very funny when he accepts awards and does so in the most big-headed way possible. I think it’s a trickier type of humour to pull off, talking yourself up in that way.

‘So no, I don’t think I’m being massively hard on myself. The fact is when you’re the bloke who is standing on the stage with the microphone, commanding an audience’s attention, you’re in a very elevated position anyway.’

That said, If I’m Honest brilliantly elucidates the frustration that arrives in middle age – and lives up to its title.

‘I’m bored looking for things, I’m bored of trying to find stuff, because I can never find it, and it is entirely my fault,’ Ed says. ‘Nobody’s hiding my stuff from me. Although my wife did actually move my passport on one occasion’.

He insists that, while the show might have mordant and occasionally morbid aspects, it’s also not without its quietly triumphant moments.

‘I thought I was being quite upbeat talking about the small victories,’ he says. ‘You know, finding positivity in being able to spot when a cramp was about to happen in your leg and dealing with it before it does. I was very happy with myself about that.’

Age, it seems, has not withered him. Especially now that he’s figured out how to head off ailments before they become a problem.

‘You see comics who are my age and older but are still retaining a level of “cool” and drawing a young crowd. I can’t deny that I’m quite envious of that. But there’s also something very satisfying about your audience growing old with you.’

Since the pandemic hit and live comedy as we know it temporarily ceased to be, Ed has done a few socially-distanced gigs as well as some on Zoom and he cannot wait to get back on the road properly. It will have been 18 months since he last performed a tour date.

“I’ll have to see what still works and what doesn’t. I’ve missed doing stand-up the most during this lockdown. No-one told me ‘you’re not going to be touring for 18 months’ or I would have planned it better”.

Ed Byrne will be performing at The Core Theatre, Solihull on 23rd February 2022. 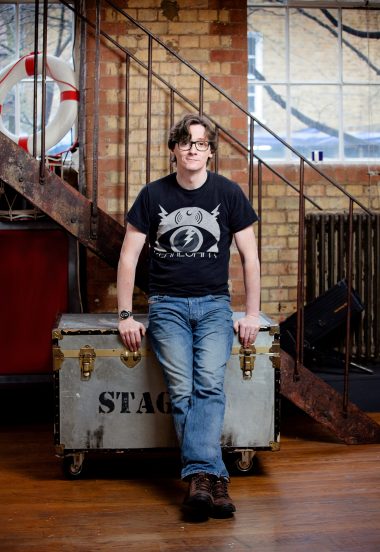 FREE Event: The Sky in a Room with Icelandic artist Ragnar Kjartansson is a ‘never-ending lullaby’

COMPETITION TIME: Live like a Viking for the day at Drayton Manor

Summer of Colour at Compton Verney