As if by magic, the stunning Wizarding World Wand Installation appeared in the Birmingham Bullring this morning in preparation of the exciting switch-on event this evening (11 March 2022).

Lucky fans Beatrice Ramos, 7 and Georgie Loggie, 13, were the first to get their pictures with the 15 feet tall wands which are exact wand replicas of favourite characters in the Harry Potter and Fantastic Beasts films.

The Wizarding World Wand Installation is here to celebrate the upcoming release of Fantastic Beasts: The Secrets of Dumbledore. 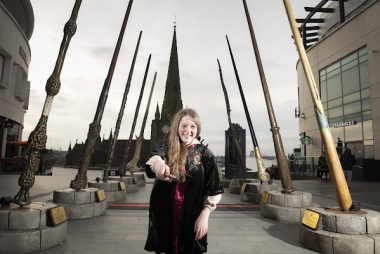 The Secrets of Dumbledore will be in cinemas from the 8th April 2022. Featuring Georgia Loggie, (13).

This is the second stop of a UK tour for the 15ft tall wands, with locations chosen by a public vote.

The wands will be on display at the Bullring in Birmingham until 17th March, before visiting Stoke-on-Trent and Reading.

The wands will illuminate each evening, from tonight until Thursday 17th, performing a light show to the thrilling music from the Fantastic Beasts and Harry Potter films.

Fantastic Beasts: The Secrets of Dumbledore will be in cinemas from the 8th April 2022.

FREE Event: The Sky in a Room with Icelandic artist Ragnar Kjartansson is a ‘never-ending lullaby’

COMPETITION TIME: Live like a Viking for the day at Drayton Manor

Summer of Colour at Compton Verney