Events are being held across the country today to celebrate Armed Forces Day 2022 (Saturday 25 June) to highlight the efforts and work our Armed Forces do to keep the people of the United Kingdom safe, at home and abroad.

From Bedfordshire and Berkshire to Warwickshire, Worcestershire and the West Midlands, more than 150 events are being held by communities across the country with parades, salutes, fayres and flypasts.

Armed Forces personnel from across all three single services took part in a special tri-service parade in Scarborough, led by The Band of HM Royal Marines, and air displays, led by the Royal Air Force Falcons display team, who landed and on the beach. This was followed by the RAF Red Arrows, The Battle of Britain Memorial Flight and RAF Typhoon aircraft. 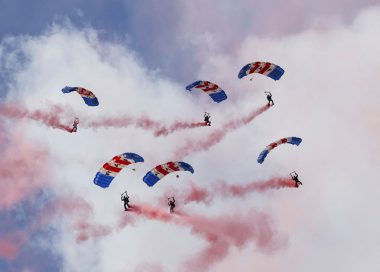 Around the world, from the forests of Estonia and the waters of the South Atlantic to the skies above the UK, the Armed Forces have been hard at work throughout the year and local communities will turn out in force to thank them for their efforts.

“You are hugely admired by the people of this country – who cheered you most recently at the Jubilee celebrations – because they are so proud of everything you do to keep us safe. You are there for us and our country when we need you, whether you are watching the skies, patrolling the seas or standing over our interests.

“Thank you to everyone in the vast military family. Thank you to our incredible veterans. And thank you to the family and friends – whose support is so crucial to ensuring that we have the best fighting force anywhere in the world.” 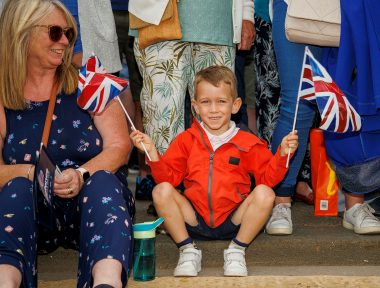 A mother and her son sit and soak up the atmosphere waiting for the parade to begin. Photographer: Sgt Ben Maher – ©MoD Crown Copyright 2022

In London, a special tribute to the Armed Forces took over the iconic billboards of Piccadilly Circus. The monumental screens showed moving portraits of Armed Forces personnel alongside a thank you message from the nation.

On Tuesday 21 June, Prime Minister Boris Johnson hosted a reception at 10 Downing Street for military personnel, to thank them for their efforts in protecting the country and supporting allied partners by land, sea and air. 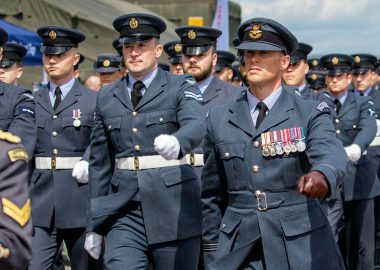 “Our service personnel and their families’ unwavering commitment to the defence of the United Kingdom ensures that we are kept safe, at home and abroad, 365 days a year.

“On this Armed Forces Day, I hope the entire nation will join me in saying thank you to this community who make so many sacrifices to defend the freedoms and rights of British people.”

Armed Forces Day is the culmination of a week of events which celebrate the entire Armed Forces community and all that they stand for.

Now in its 14th year, Armed Forces Day is an opportunity for the nation to show its respect to military personnel and their families, thanking them for defending our way of life, protecting British citizens around the world, and strengthening the UK’s relationships with our allies and partners.

To find out more about Armed Forces Day click here.

Top 10 casinos with no deposit bonus