England’s Euro 2022 final with Germany was watched by an average of 11.0 million people on TV, a record for a women’s football match in the UK.

The audience peaked at more than 17 million in the closing minutes of the Lionesses’ 2-1 victory, according to overnight figures released by the ratings organisation Barb.

This is also a record for a women’s football game. 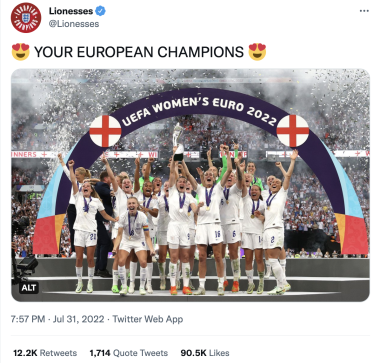 The previous highest peak came during England’s 2019 World Cup semi-final defeat by the United States, which saw a peak audience of nearly 12 million.

The average audience of 11.0 million is for BBC One’s entire coverage of Sunday’s final, which ran for several hours during the afternoon and evening.

It is slightly behind the 11.2 million average overnight ratings for the Queen’s Platinum Jubilee concert, which was broadcast by BBC One in early June, and which remains the biggest TV audience of the year so far.

Ratings for Sunday’s match peaked at 7.32pm – the moment the final whistle blew – when the audience reached 17.6 million, Barb said.

The average TV audience for the match itself, from kick-off to final whistle, was 13.6 million, according to the BBC.

“We are incredibly proud to have championed women’s football and are thrilled we were able to bring such a special sporting moment to the public.

“This was the most-watched women’s football game on UK television of all time and deservedly so.

“Everyone at the BBC is delighted at the win and being able to share that with the public.”

Separate figures from the BBC show that coverage of the game was streamed 5.9 million times across the iPlayer and BBC Sport website.

Top 10 casinos with no deposit bonus